The cryptocurrency market continues to struggle in bearish conditions. After a modest rise yesterday, its total cap is down by 4% in the 24 hours. At $928 billion, it’s also down by 5.8% in a week and by 31% in a month. Few coins have escaped the damage, with a number of top-100 cryptocurrencies down by as much as 10% in a day. However, the prior cyclicality of the market suggests that a big rebound will come sooner or later. As such, here’s our pick of the 5 next cryptocurrency to explode. This includes coins with good short- and long-term potential.

5 Next Cryptocurrency to Explode 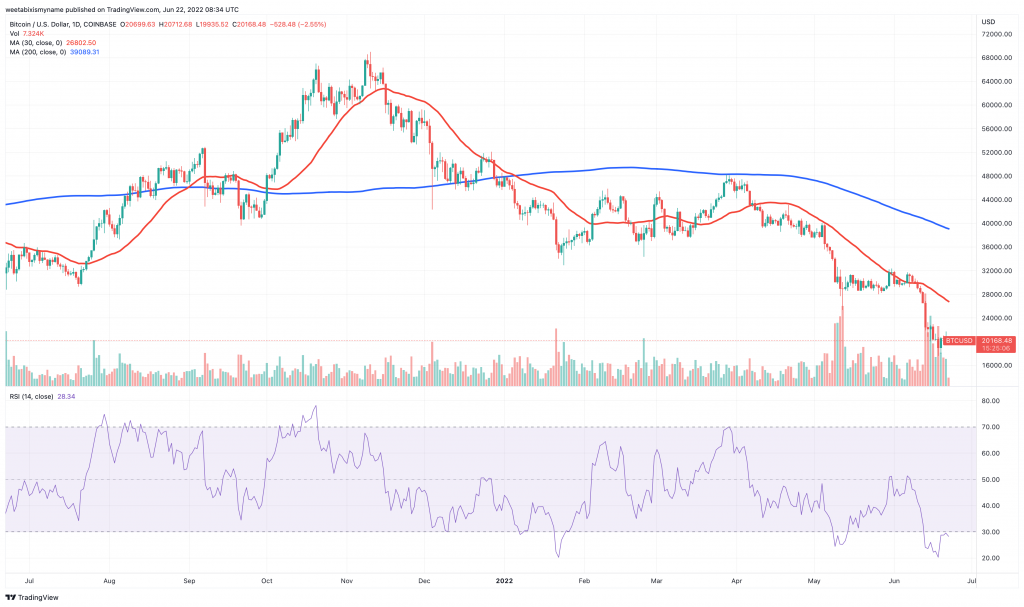 BTC’s indicators have basically hit rock bottom. That’s not to say that it can’t continue falling over the next few months, especially with ongoing macro issues. Nonetheless, previous cycles have seen the cryptocurrency rise strongly after its relative strength index (in purple) fell below 30. Likewise, its 30-day moving average (in red) has sunk well below levels at which the coin had previously risen.

Bitcoin’s status as the market’s biggest cryptocurrency also means that it will lead any market-wide recovery. Its rises initiated the bull markets of 2020-21, 2017-18 and 2013-14, and its movements will initiate the next bull market.

This will be helped by the use BTC continues to attract. Institutions hold around $27 billion in BTC, while banks have been slowly increasing their involvement with the cryptocurrency in recent months. Then there are the nations which turn to BTC during periods of very high inflation (e.g. Turkey and Argentina), as well as those that have made it legal tender (El Salvador and the Central African Republic).

Such growth points to why BTC is likely to lead the next charge. This is why it’s on our list of the 5 next cryptocurrency to explode. 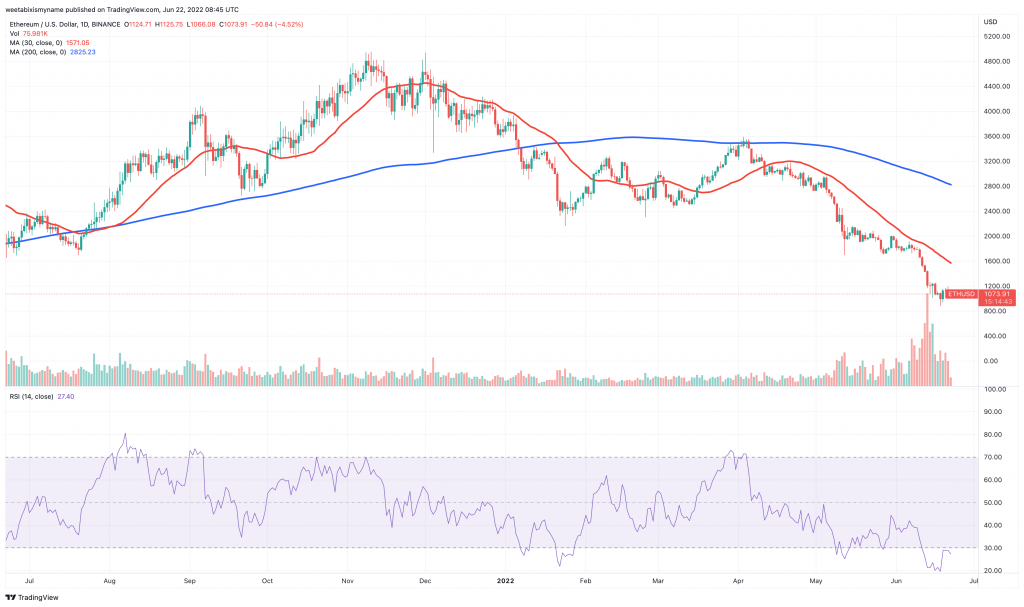 ETH is massively undervalued right now. Its RSI shows significant overselling, which has continued since at least May. In purely technical terms, it’s due a rebound. Of course, macro issues and industry-wide contagion may continue delaying this rebound for at least a few weeks or months yet.

Still, ETH really is primed for a big rise sooner or later. The reason why is that Ethereum is in the process of shifting to a proof-of-stake consensus mechanism. This will make it less energy intensive, more scalable, and more attractive to investors.

Congratulations to the #Ethereum community on a successful Merge on the Ropsten testnet.

There is over $22.78B in value staked and ready for the upcoming main-net Merge to Proof-of-Stake.

Due at some point in late summer, the ‘Merge’ will massively boost investor confidence in Ethereum. In particular, the implementation of staking will increase demand for ETH, which will obviously be necessary for staking. And with 10% of ETH’s supply already staked on the PoS Beacon Chain, the cryptocurrency could even become deflationary. This is why it’s one of our 5 next cryptocurrency to explode. 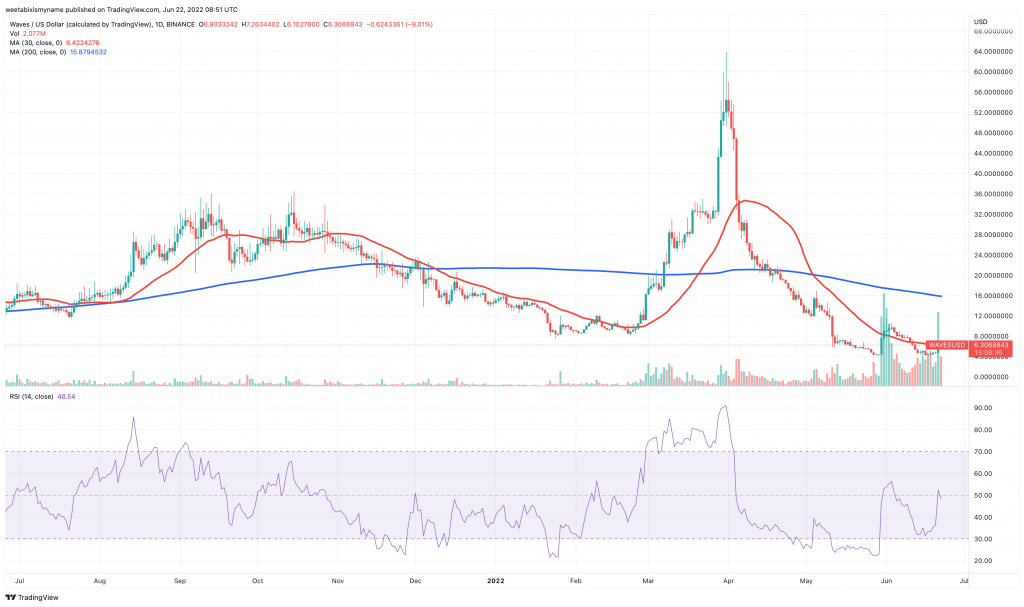 WAVES is a rare coin enjoying some half-decent momentum right now. Its RSI is up to 50, while its 30-day average is inching upwards.

WAVES has been one of the best-performing altcoins during the current bear market. Its native platform, Waves, provides open‑source technologies to help developers build scalable and decentralised Web3 apps. It’s undergoing a series of important developments this year, providing one of the main reasons why WAVES had been rallying (on and off) since late March.. Its biggest upcoming change is that it’s transitioning to Waves 2.0, which will introduce significant scalability enhancements. Waves DAO is also on the horizon, a decentralised autonomous organisation that will open its governance up to its community.

Another reason why WAVES is rallying is the growth of its native stablecoin USDN. In particular, the launch of LP staking this month on the Waves Exchange has drawn more people towards the Waves ecosystem, due largely to the promise of yields of up to 29%.

🚀Welcome USDN LP staking! https://t.co/UgstB7CDOk
In the first three days, investors saw an APY of up to 29%.
Learn more and start getting an income👇https://t.co/3448uDkPsq pic.twitter.com/w1B9GiujMe 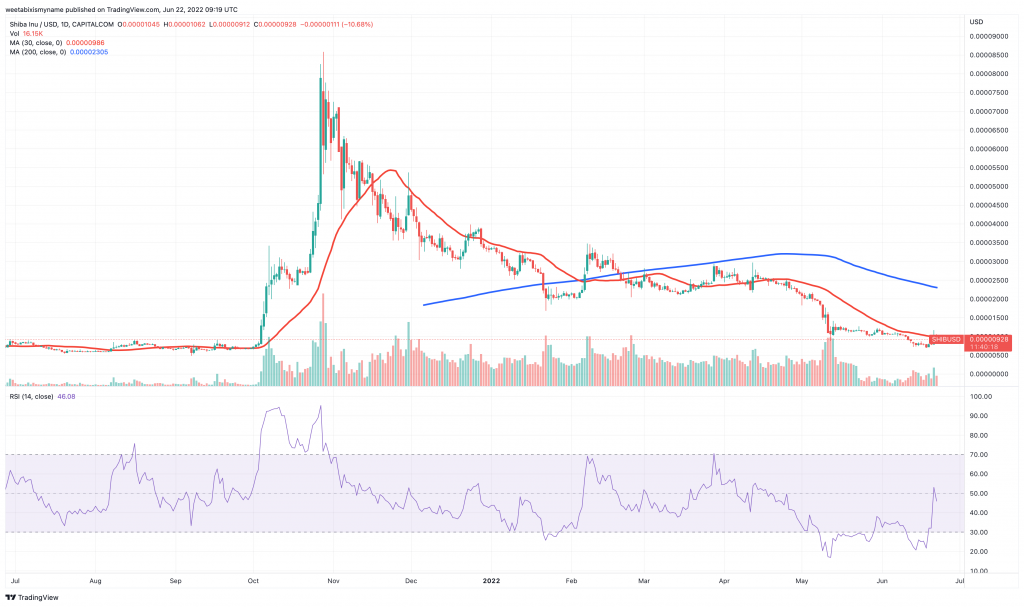 SHIB has seen a spike for one reason in particular. That is, a series of token burns have been instigated in the past 24 hours, with over 200 million SHIB destroyed so far.

In the past 24 hours, there have been a total of 216,301,162 $SHIB tokens burned and 15 transactions. Visit https://t.co/t0eRMnyZel to view the overall total of #SHIB tokens burned, circulating supply, and more. #shibarmy

Even in the past hour, some 10 million SHIB has been burned. This is being led by groups within the Shiba community, who are committed to creating a price pump, which in turn should attract new buyers.

The strength of the Shiba community is one of the main reasons why SHIB should never be discounted from future rises. It has also witnessed increased accumulation among whales, a process which could magnify the ongoing supply squeeze. This is why it’s in our list of the 5 next cryptocurrency to explode. 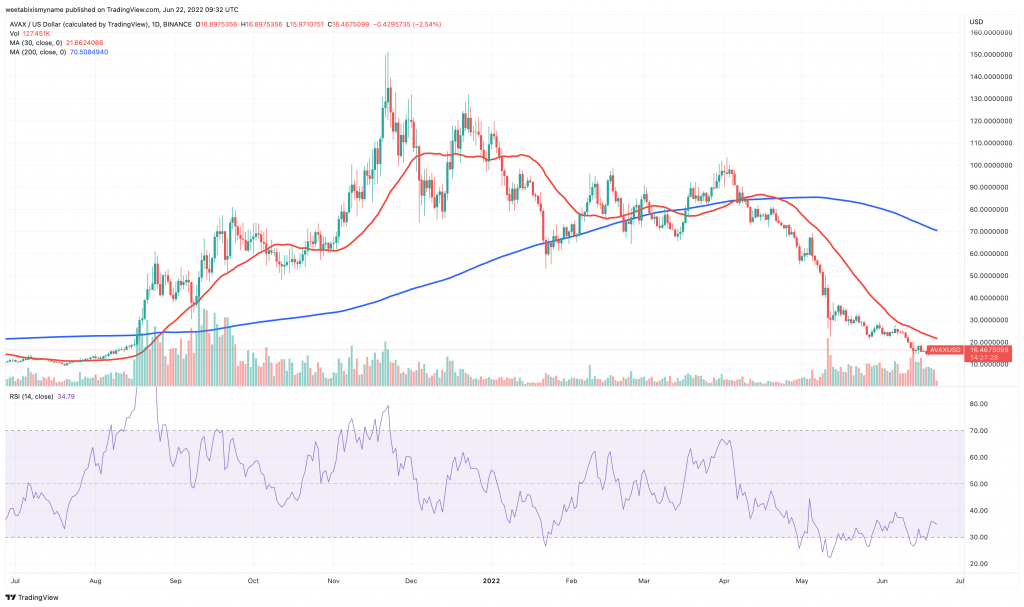 Like ETH, AVAX is another altcoin that is significantly undervalued. Its RSI shows that the market has been overselling it since at least May, making it ripe for a surge.

The coin’s fundamentals certainly point to a future spurt at some point. Its native platform, Avalanche, raised $350 million at a valuation of around $5 billion in April. This follows a $230 million raise from last September. Such rounds indicate that has the resources to continue growing, with Avalanche now the fourth-biggest platform in crypto in terms of total value locked, having recently overtaken Solana.

On top of this, Avalanche launched a $290 million incentive programme in March, aimed at developing metaverse applications. This paves the way for further growth, and again, suggests that AVAX is set up very well for the future. This is why it’s on our list of the 5 next cryptocurrency to explode.

Introducing Avalanche Multiverse, an up to $290M incentive program focused on accelerating the adoption and growth of Subnets. Multiverse is focused on supporting new ecosystems, including blockchain-enabled gaming, DeFi, NFTs and institutional use cases. https://t.co/R5euxSV5hx pic.twitter.com/PHpET78P6L 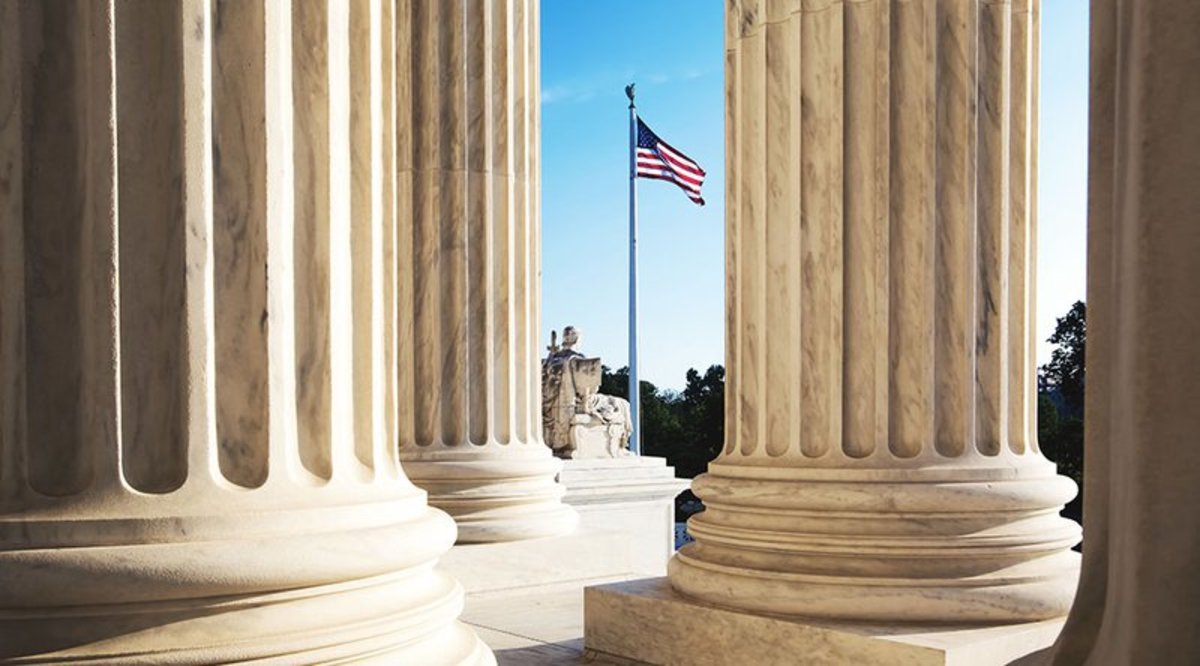 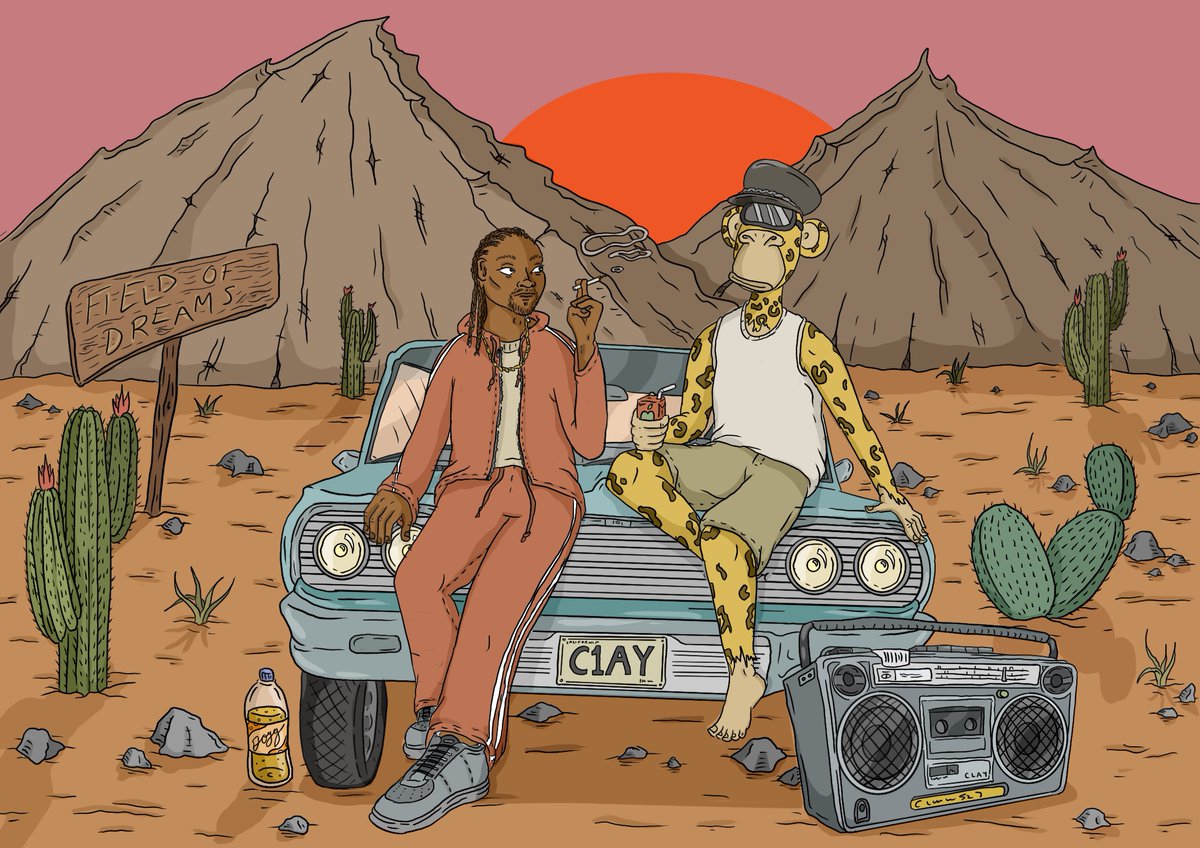 Snoop Dogg, Clay Nation & Cardano Come Together On The Blockchain 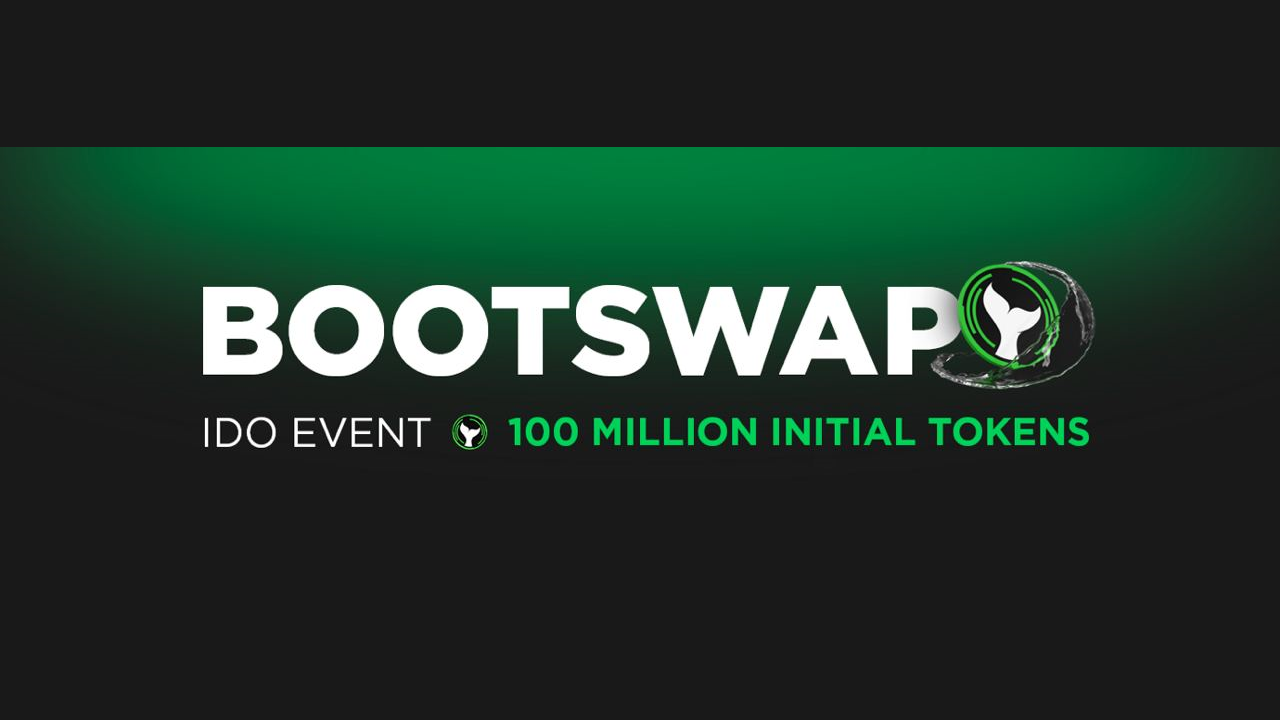 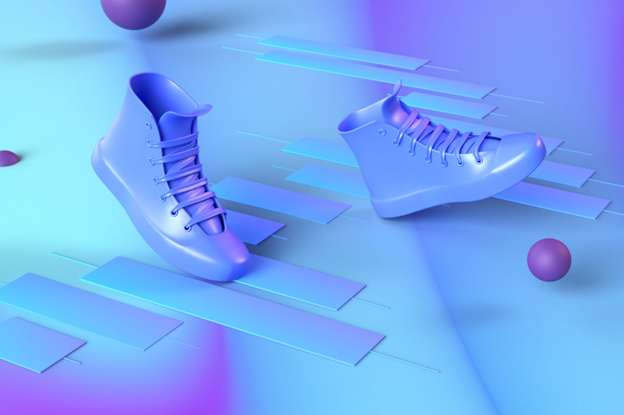